Sorry for the long delay in updates...we were going to update prior to the release of 'Jeff Beck:Live At The Hollywood Bowl' but then Hurricane Irma hit South Florida and that threw a monkey wrench into everything. We've been spending most of our spare time trying to clean up and put things back together.

The hurricane hit a little less than a week before a memorial we arranged for Dick but Trini, Rich and I did manage to get out of South Florida in time to pull it off. We saw a lot of Dick's friends from our home town, Marblehead, Mass and a few from farther way (Rick McGowen came up from NYC). The night included music, of course, from two bands and, of course, included some Jeff Beck tunes. 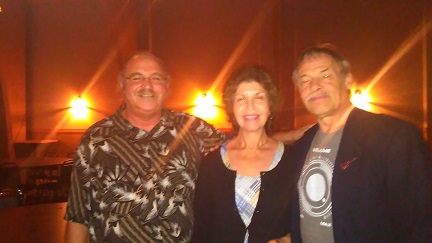 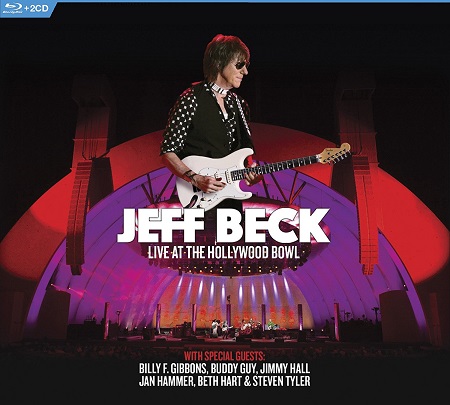 So on to the news. 'Jeff Beck:Live At The Hollywood Bowl' was released October 6th (see our marquee) and has been received well. Here's some reviews...


Jeff will be performing at the SEMA (Specialty Equipment Market Association) Industry Awards Banquet on Thursday, November 2nd in Las Vegas with Billy Gibbons, Michael Anthony and Jimmie Vaughn. Here's a link to their page where if you're attending the convention you can buy tickets. 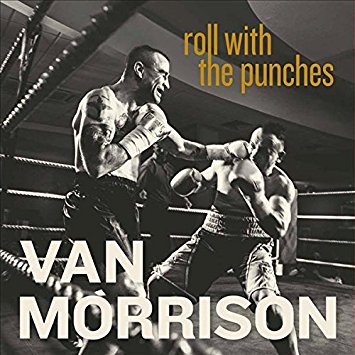 Jeff and Sandra attended the premiere of David Gilmour's 'Live In Pompeii" movie last month. Here are some links to pics at gettyimages.com...


Ed Chapero came up with is one and it's great!! Check out this link; https://1960smusicmagazines.com/category/jeff-beck. A bunch of old articles and blurbs about Jeff from the 60's that he's sure to hate. LOL. 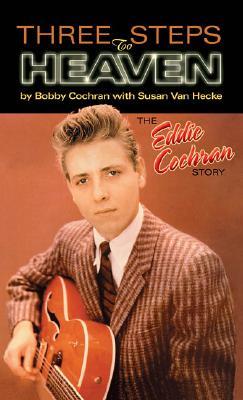 A new book out about one of my heroes, Eddie Cochran is out. Written by his nephew Bobby Cochran and Susan Van Hecke, the jacket features a quote by Jeff. "I didn't know (his songs) were cut in the 50's, and if I didn't know how many tracks he had to work with, I swear to God there's have to be five guitar players on that record." Google has a summary of the book, it's a good read.

Ed also came up with this link, http://forgottenbands.blogspot.com/2011/03/next-band_8598.html. It's a full history of one of Jeff's first band, Pat Cresswell and The Crescents, which were later just called The Crescents. Follow the link in the article to The Deltones piece as well. Both, another good read.

The Hurtwood Park Polo Club where Jeff did a benefit gig for Roger Taylor last year is available to rent for events it seems. To promote it they use a lot of photos from some of the famous folks who've been there. Check this out... www.hurtwoodparkpolo.co.uk/famous-faces

Lastly this, an answer from gibson.com to the burning question "What album does Gene Simmons listen to before every KISS show?". http://www.gibson.com/News-Lifestyle/News/en-us/Gene-Simmons-Favorite-Records.aspx

We felt had to get something out for Jeff's 73rd, Hah. It's taken a while, sorry. We have a new Jeff Beck Bulletin #22 out and it took me a while to write the editorial, read it, you'll see why. Also the first feature, the Orient Tour report took a while because Sid sent me a million (I've told you a million times, don't exagerate) pictures I had to go thru and resize but there are some good ones in there.

Things have been quiet lately but here's a recap of what news we have from the recent months...
There don't appear to be any plans to tour the US this year, but the good news is Jeff has signed a multi-year deal with Warner Bros. Music so that means new recordings.
The DVD of the 50th anniversary show filmed last August in LA at the Hollywood Bowl is expected to be released this spring on Eagle Vision.
Jeff has also made guest appearances on recent albums by ZZ Top, Beth Hart and Imelda May's new album.
The Bones ladies have moved to the USA after a farewell show in the UK.
Jonathan Joseph is touring as the drummer for ex-Jethro Tull guitarist Martin Barre. They recently played the 'Daryl's House' club in Pawling, NY, check out Jonathan's FaceBook page for pics.
Jimmy Hall has joined the Hank Williams Jr. U.S spring/summer tour.
Rhonda Smith continues work on her third solo album and will be appearing at Sweetwater's 16th annual 'Gear Fest', June 23rd and 24th in Fort Wayne, IN to promote PRS, Paul Reed Smith products. 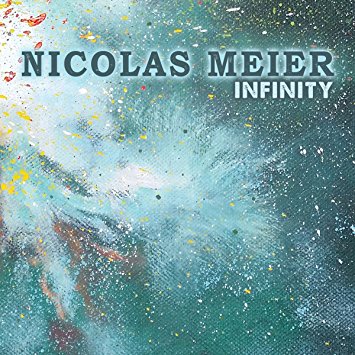 Nicolas Meier has a new album out, "Infinity". The album features Vinnie Colaiuta on drums and Jimmy Haslip (any Tommy Bolin fans out there?) on bass. A fall U.S. tour is planned.

We were saddened to hear of the passing of our friend Jimmy Copley last month. Here's one of the obits... 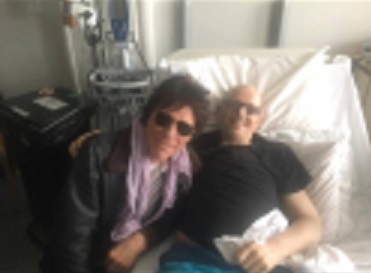 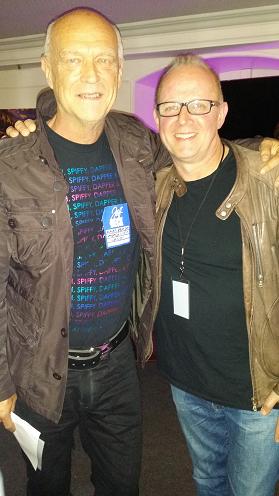 One Jeff and Sandra siting a couple of months back...they attended John McLauglin's show at Ronnie Scott's on March 14th. 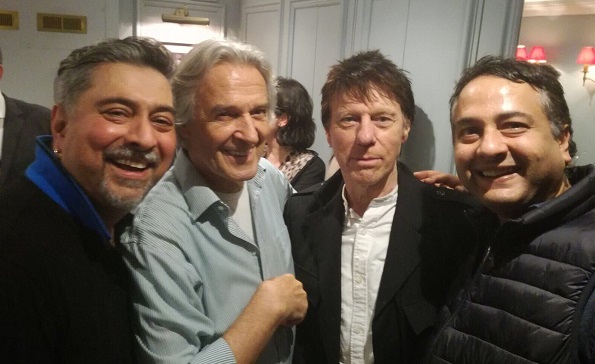 Finally, got this letter from a fan. 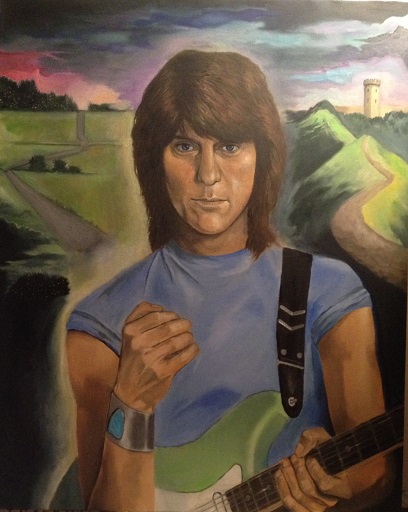 What do you think? Pretty good, right?

This is a late add...as I mentioned before Rhonda Smith was at Sweetwater's GearFest 2017 last week but I didn't know that JB2 (aka Jennifer Batten) was there as well giving clinics. Sweetwater has just released videos interviews with both these ladies as well as another Jeff Beck alum, Terry Bozzio. Terry was at GearFest with what only can be described as a sick drumkit. Check em' out.

Be seeing you. BA

Ok, time to get back to work. I have a confession. I have been putting off the updates on the page because when I do them it reminds me that Dick is gone. At some point in the writing I think 'I've got to call Dick and ask him...' and then it hits me, oh, that's right. Anyway.

Two big things happened since the last update the first and foremost being Jeff's 'Orient Tour'. Our Japanese correspondents, Hiroko, Toshi and Yukinori sent us a ton of photos. It's going to take us a while to wade thru them but as of right now I'm hoping to feature them in a new JBB#22. 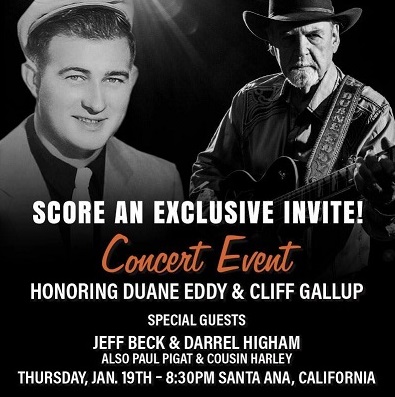 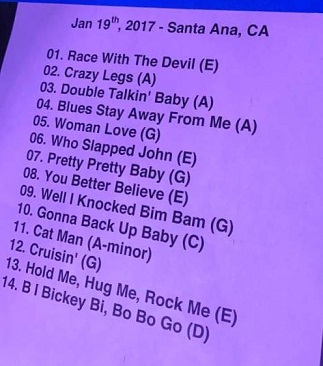 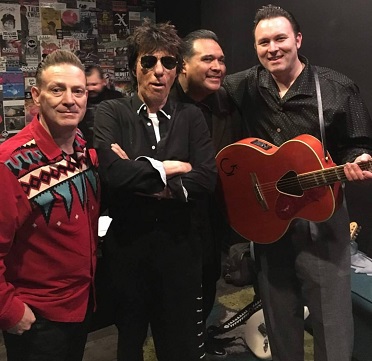 The other big thing was that Jeff took sort of a detour on his way to his gig in Seoul and played a private show tied to the NAMM convention in Anaheim, CA on January 19th. He played a set of Gene Vincent/Cliff Gallup songs with Darrel Higham at an offsite venue call 'The Observatory' in nearby Santa Ana, CA. The event was put on by Gretsch guitars to announce their new 'Cliff Gallup Signature Duo Jet' guitar. The event was private for the lucky 350 guests some of whom did win tickets thru a contest on the Gretsch website. Gretsch also announced a new 'Duane Eddy Signature Limited Edition Hollowbody' and so of course Duane played a set as well and he and Jeff jammed at the end of the show. Here's links to all the media and YouTube videos we've collected.

Next item up comes from Ed Chapero and features his talent for finding the slightest thing on the internet that has anything to do with Jeff. A Montreal based film company called Rezolution Pictures has produced a film that was premiered at the Sundance Film Festival January 22nd entitled 'Rumble, Indians Who Rock The World'. Here is the link to an article about the film. The relevant paragraph is...


I found this funny, I used to do the same thing! My older sisters bought me 'Link Wray And The Wraymen' back in '59, LOL. 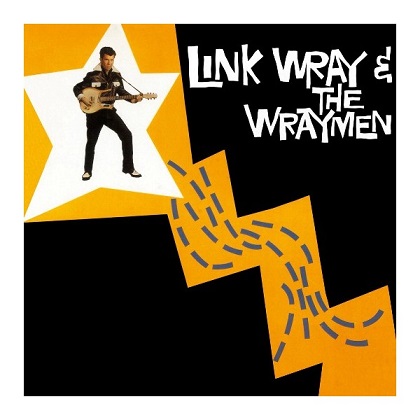 Vocalist extrodinaire, Beth Hart has a new album out...'Fire On The Floor'. It was released in Europe last October but the US release that dropped on February 3rd had a bonus track that featured...wait for it...wait for it...Jeff Beck! The track, 'Tell Her You Belong To Me' is a remake of a song penned by Beth that appeared on her 2015 release 'Better Than Home'. Here's a YouTube link to the track.

A reminder, last update I mentioned how Jeff recently bought an air raid siren from one Paul Lawrence. His signed acoustic guitar that Jeff played in his very own kitchen is still available so if your interested...Also, if you're interested in a used air raid siren I think Paul has a few left. 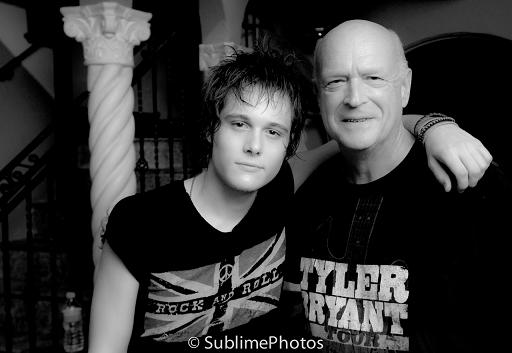 Happy New Year all. We got thru the holidays but it was sad without Dick, but we press on.

On Febuary 1st, a deluxe edition of 'LOUD HAILER' will be released in Japan with 3 bonus cuts: live versions of "Live In The Dark", "Scared For The Children"and "The Revolution Will Be Televised" recorded live in Baloise Session, Basel, Switzerland October 22nd.

A DVD/BluRay of Jeff's 50 Year Anniversary show in Los Angeles from last August is in post production and a release date is expected the first quarter 2017 on Eagle Vision.

Here is a tidbit I posted last update...
Came across this curiosity last month...on YouTube a video entitled 'Jeff Beck playing MY guitar in MY Kitchen'. Sounds interesting let's look...https://www.youtube.com/watch?v=Mdb4l7tOnIg. This was posted by 'atticboy11'. On the page you'll notice he states that Jeff was at his house to buy something, that's it. If you go and look at atticboy11's other videos it seems he likes air raid sirens. Would Jeff buy an air raid siren? It seems all you could do with one would be to scare off birds or piss off your neighbors. Hmmm. Now comes the 'what would Dick do' moment. Further investigation of atticboy11's video gives us his name, Paul Lawrence and his email. Dick would have definitely contacted this guy to get the story. Am I? No.
Now, I never did contact Paul Lawrence, but guess what? Out of the blue he contacted me!! He saw this post somehow (is Dick pulling some strings from somewhere?) and sent me the following email...


OK, Jeff bought an air raid siren to hook up to the burglar alarm of the garage that houses his hot rods...that is too funny. As we mentioned back in 2006 Jeff had a really cool new garage built on his property to house his many cars. Built by Karl Terry of Kent, heres a pic of it. 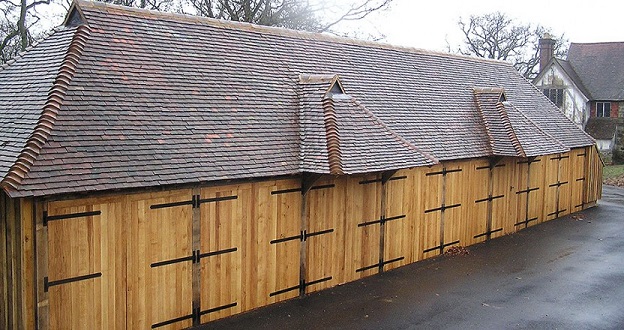 Here are a couple of pics Paul sent. If you're interested in the guitar, send me an email and I'll put in touch with Paul. 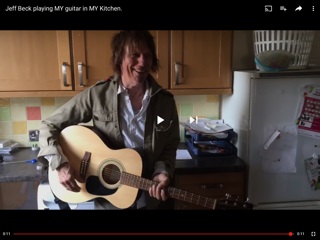 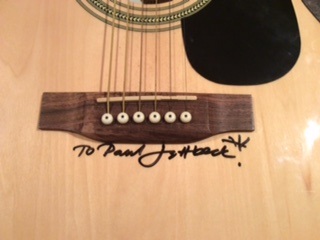 Next item comes from Ed Chapero. He sent me an ebay posting that was very interesting. It was for a 1/4" 15ips master tape of some BBA rough mixes recorded at Tel-Mar studio (owned by Chess Records) in Chicago, December 1972. The cuts were; 1.)I'm So Proud 2.)Lose Myself 3.)Superstition 4.) Why Should I Care 5.) Lady 6.) Livin' Alone 7.)Chant. The ebay posting was very long and detailed but a fascinating read. The auction closed about a day after I got the link so luckily I copied the entire description. I made a seperate html of this because it is very long. You can read it here. I contacted Carmine Appice and asked if he had any comments, which he didn't but he did send on his condolences for Dick.

Also from Ed C...this item that shows how change is constant. A new look and sound for Imelda May. Following her recent break up from former Big Town Playboys and Imelda May Band guitarist Darrel Higham, Imelda has a new album out 'Life Love Flesh Blood', produced by T Bone Burnett and featuring Jeff Beck and Jools Holland as well as the guiding hand of Bono, who mentored her throughout the process. As you can see by the photo below, sultry new look. And here is the UK Standard article link; http://www.standard.co.uk/showbiz/celebrity-news/imelda-may-debuts-new-sound-and-new-look-after-marriage-breakup-a3399421.html. Make sure to check out the video. 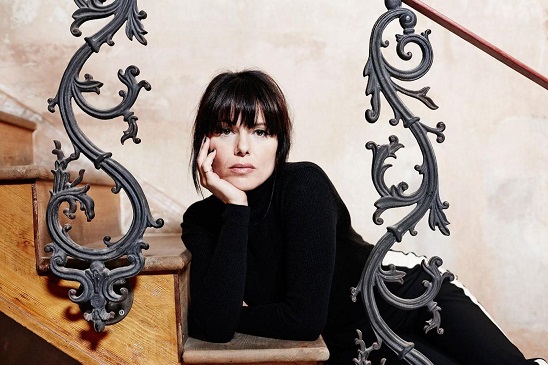 Lastly, for the last few years we've been ending our 'What's New' posts with old pictures of Jeff. I think this year we'll end with old pictures of Dick that we've posted since we started this endeavour 22 years ago...here's Dick and Sandra from his UK trip a few years ago. And of course we'll end with 'Be seeing you...', Dick's line from his favorite TV show 'The Prisoner' and the last words I spoke to him when I saw him last, the morning of September 3rd, 2016. 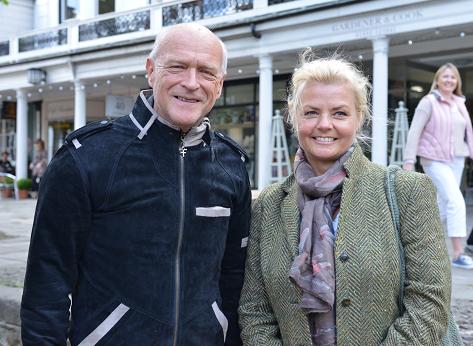