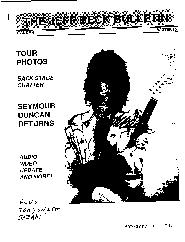 'Thank yous' for this issue...

Due to the size of this issue we've decided to print only one letter which is from Fender master guitar builder Jay Black.

Dear Dick, In regard to Jeff Beck and his guitar, this is brief history to my recollection of the signature product. Before I came to Fender in 1989, George Blanda and Dan Smith gave Jeff two guitars; A surf green and a yellow based on the American Standard of Strat Plus with a custom neck shape.

My first involvement was after Dan Smith directed John Page to start prototyping the Jeff Beck signature model. John Page had me make up three guitar protos in March 1990 - one purple with the largest neck (seen with Stevie Ray Vaughn on Guitar Player magazine); one green with a medium example of the signature neck, and one with custom graphics.(Ed. note - That's the hot rod one Jeff has sitting at home and rarely if ever plays.)

Later in June 1990 we made three more guitars to his (Jeff's) final specs now adding a double gold (lace sensor pickups) in the bridge position as decided by he and Dan Smith. Two were surf green and one was now the new purple (not as dark as proto 001).

Since 1990 we have provided Jeff with a couple of different versions of his model fitted with maple necks or other minor changes - but the majority of guitars provided to Jeff are stock line Jeff Beck models lent for special sessions or videos that he often kept. That's the nice thing about his model since he can take and play them right out of the box. I hope this has been helpful to you regarding Jeff and Fender for the last couple of years.

P.S. In 12/92 we started fitting Jeff's guitars with the new LSR nut and all his guitars since then are with the LSR nut.

ED. Come on gang let's show our appreciation for Fender's effort. Check out Fender's Website and the signature series of Fender Stratocasters.

Two 1994 summer sessions in one day. First, two tracks on Jan Hammer's "Drive" Lp and second was the Hendrix tune "Driftin'" to be found on Will Lee's (David Letterman) "Oh" CD, released only in Japan...Italian star Zucchero with Jeff on "Papa Perche" from "Spirito De Vino" Lp released in Italy and France only...Stewart Copeland had to move on to other projects as the nine track tribal sound, world rock Lp concept waited for Martin Ditcham (Sade) and ex Beck mate Richard Bailey to rejuvinate it. Jennifer Batten heard some of the basic tracks with Copeland and said Jeff sounded unreal. Are we surprised?...VH1 video interview with Jeff and Carlos with additional career clips and ten seconds or so from "Pork Pie" from opening night in VA...1st Jones Beach show on video, however it misses the antics of Jeff who put (guitar tech) Andy Roberts in a headlock when there was a bit of electrical trouble during a song. Not to worry though, Andy has been spotted at other venues so he escaped the vice grip or so in appears...Be seeing you

Update: 2nd Jones Beach show reveals Jeff finishing "Pork Pie Hat" one note short as he tosses his guitar to the stage floor, raises his hands above his head in triumph, and shakes them as he leads the band into the finish...Quotable Jeffism from the same show at the encore; "I've had complaints about the color of my green guitar so I've switched to the white one!"...Jeff's track with Pino Palladino and Tony Hymas on John McLaughlin's next project is almost a year in the can and yet to be released (update 97, was released in '96)...Kansas City video finds Santana singer Tony Lindsay rendering the vocals to "People Get Ready"...A new Marshall head had to be hurried in for the last show at the Paramount in N.Y.C. as one of the trustworthy old ones took a dive...Santana and Beck did a soundcheck together out in L.A. but nothing ever came of it...Jeff did get his rightful place at the Hollywood Rock Walk of Fame but there weren't a lot of people of fans around when it happened. Can't say more...Toronto on video...Hero of the tour - Michael Springer. After attending many consecutive shows he was recognized by Jeff's stage crew who invited him back after the next show. Michael had the balls to tell Jeff he had taped ten shows. After confirming that Michael had no plans to bootleg them, Jeff had a listen, liked what he heard and made arrangements to have copies sent to London. So far they haven't arrived. In turn Michael got to hear basic tracks from the new Lp! In closing, congratulations Jeff on your pilot's license. When you gotta land, you land!

Seymour W. Duncan
I made Jeff Beck's "Tele-Gib" guitar in 1974 during my stay in London while working at the Fender Soundhouse. I was doing guitar repair and modifications and working with many top European guitarists. During the evenings I was recording at Polydor Records and experimenting with guitar sounds.

The "Tele-Gib" started out as a butchered '59 Fender Telecaster that originally had a slab rosewood fingerboard. The body was chiseled out badly and had been through some unearthly modifications by the look of it. It had no pickguard, bridge or other parts that could be used. The Telecaster was found in 1972 at a music store in Cincinnati, Ohio. I took it with me when I left for London to meet Roy Buchanan and his manager, Jay Reich in early 1973. Roy started his European tour in Germany before heading for London. My manager at the time, Norman Vandenberg, also managed Christopher Rainbow (Alan Parsons-Camel and solo albums) saw an ad in a London paper that the Fender Soundhouse was looking for a guitar tech to do repairs. I was doing sessions at night and had free time during the day and decided to apply for the job. I got the job, working with amp whiz Ron Roka who had a repair shop on the main floor of the Fender Soundhouse. The Soundhouse was originally on Tottenham-Court Road in London. Working there was great and I had a chance to meet so many great guitarists that rehearsed on the 3rd floor sound studio. Nearby was CBS Studios where Jeff was recording the 2nd (unreleased) album with Beck, Bogert and Appice. Jeff was playing his Stratocaster through a Fender Deluxe Reverb amplifier set on 10! I remember sitting in the control room and watching Jeff, Tim and Carmine playing live. I believe Andy Johns was engineering and jumping around the studio dancing to the music. I was sitting with Jeff's manager Ernest Chapman as we watched the session being recorded.

The next day I grabbed my old battered Telecaster and started removing the destroyed fingerboard that somebody did a bad fret job on. I made a homemade heating element to remove the fingerboard. I replaced it with a 3/16th of an inch piece of maple and cut the fret slots by hand. I put in heavier Gibson frets with a 13" inch radius. The frets were 18% nickel silver Gibson Les Paul frets. The neck was sprayed with nitrocellulose lacquer I got from master repairman Sam Lee. Sam had a repair and vintage shop with Steve Howe who played in the group "Yes". The neck never had a replacement decal though I've been wanting to put one on for years. I was trying to get the guitar finished quickly as Jeff only had a few more days in the CBS Studios.

The next step was to find some material for a pickguard. My manager Norman found it nearby at a plastic fabrication shop. I cut the shape by hand and got it ready to install the neck pickup.

I had to rewind a broken pair of old Gibson '59 "Patent Applied For" humbuckers that were damaged when the covers were removed. The pickups were from an old smashed '59 Gibson Flying V that was painted black and once belonged to Lonnie Mack. Lonnie often played in Cincinnati, Ohio and lived nearby in the state of Indiana. It was hard finding the magnet wire needed for winding the coils. I found the wire at a motor repair shop and ended up with two different rolls of wire for winding the coils. I used the heavier gauge to wind the neck pickup also because I had only a small amount. I used the finer wire to wind the bridge pickup because I could get extra turns on the bobbins for increased sustain, harmonics and output.

The body was light ash with blond nitrocellulose lacquer finish. I recall the weight to be about 6 1/2 pounds. The pickguard was ready for the neck humbucking pickup and I used the original cream Gibson '59 neck mounting ring for that. I wanted to keep the original cream Gibson '59 bridge mounting ring and found another one for the bridge. I didn't want to cut the '59 cream ring for the bridge position and used it on my "Tele-Gib" I made around 1976. I have my JM-neck and JB proto in the bridge and can be heard on my recordings "King Tone Blues" and "When A Man Loves A Woman". I had to salvage an old Telecaster bridge plate that could be cut to fit the bridge humbucker. I cut the bridge straight across in front of the Fender logo. The front of the plate was smoothed out and rounded slightly. It has 3 early 50's brass saddles given to me by Roy Buchanan in the mid 60's from an old guitar someone gave him. The bridge pickup fit into the recess on the pickguard that I crudely cut. It was made from a dark chocolate brown plastic about .093" thick. It has 5 holes like traditional Tele pickguards and I mounted the neck pickup and mounting ring using 4 Gibson neck mounting ring screws.

The neck pickup is zebra with the cream stud bobbin facing the bridge and the black adjustable bobbin facing towards the neck. The bridge pickup is double cream and an original '59 Patent Applied For humbucker. The 6 adjustable 5/40 fillister screws are adjusted so the bottom of the head is about flush with the top of the bobbin.

The lever switch knob was from a handful that I got from an old telephone switchboard during the mid 60's. The same knob was given to Roy Buchanan and can be seen on the cover of his "Loading Zone" album (Atlantic SD 18219). I gave them to Roy about 1966 when he was playing at a club in Wildwood, New Jersey. The volume and tone control knobs and control plate are from an early 50's Telecaster.

Jeff used the "Tele-Gib" on the "Blow By Blow" album and others after that. He recorded "Cause We've Ended As Lovers" and songs like "Freeway Jam". You can see Jeff playing it on the video "Secret Policeman't Ball". Jeff is my favorite all around guitarist and I can't thank him enough for all the help and friendship he has given me throughout the years. He has many tricks up his sleeve so sit back and listen to what he does! He's the best! SWD

Several years later I wanted to make the same pickups with the winding specs I used on Jeff's "Tele-Gib". I called the neck pickup JM-neck for John Milner whose one of Jeff's favorite characters in the movie "American Graffiti" but later changed to Jazz Model-neck so a player could better indentify with it for it's clean smooth tone. The bridge pickup became the JB because you can play Jazz and Blues with it. Thanks...Seymour W. Duncan