Welcome To The Village

We figured it would be a relevant thing and less confusing if we started an Issue #6 than ramble on in Issue #5. Jeff is getting into a brand new revved up mode and so are we. Besides, if we kept rambling on, some of the 'Thank You' credits would become most bizarre. The massive market of the internet combined with Epic's sudden mega support of Jeff provides us with the opportunities of a lifetime to accomplish several things. First, at the risk of sounding like a skipping record (or CD I should say), we have to reach out and communicate with every known link to Jeff's recorded past to help further research that area. Secondly, we need to document this set of tours and related media and pool all material into centralized Jeff Beck fan websites. That means we need each and every one of you to help. No press clipping is too incidental to send. No commentary of a live tape and/or performance is too insignifigant to inform us of. Finally, we have a responsibility to act prudently when publishing or posting anything on the internet regarding Jeff Beck. He may say that he's detached from all the sideline stuff that celebrity status spawns, however, look at who may be watching??.. Who Else?

There are two ways you can look at the title of Jeff Beck's decade long anticipated Lp. One, is that it's a spoof as if Jeff pumped out so much material all the time that sounded alike that people would listen to it and go 'Yeah, that's Jeff alright, hear him all over the tube and radio, yeah, who else'. Since we know better, the second way is much more politically correct and appealing. That is that who else could blend techno live drumming with diversified cultural wailings from places such as Bulgaria and Arabia and still manage to pulloff sweetness and emotion from every breath and yet all in the name of rock and roll? Who else indeed...Jeff Beck.

The sendoff to Cozy Powell, "Another Place", is 'definately maybe' a 2 box Kleenex experience as is the reworked and renamed Euro and SA tour masterpiece "La Veranesse" now called "Angels Strut". The tempo is slow and deliberate and Jeff mixes different finger, hand and slide techniques soaring off into the heavens with ecstacy. Not to go soft on you, Jeff is heavy handed with such things as the Jan Hammer penned "Even Odds" and the single from the Lp "What Mama Said". A funkier and more deliberate "Even Odds" on the Lp is exact and to the point yet allows Jeff to roam subtlety and over the top at points and the melody line from the bridge is most memorable. It should be noted that Jeff was stressing that this time around there had to be a lot of melodic content and that he didn't want just another shred groove without redemption. That's why he chose to start from scratch and basically ditch the fun stuff he did with Steve Luthaker last year. The single, "What Mama Said" is basically the Euro/SA tour "New Tech". Inserted for fun, airplay and uniqueness, a dialogue bit from the old sixties comedy movie "It's A Mad, Mad, Mad, Mad World" in which Dick Shawn asks about 'What Mama Said'.

"Brush With Blues" gets it's own paragraph. First of all it is a first. Jeff has never put a live track before on a planned (contract fulfilling, hah!) studio release of new material. (Anyone emailing about "Blues Deluxe" from 'Truth' please take two steps to the rear. Also, BBA Live In Japan, w/Jan Hammer and Beckology don't count.) Secondly, if there is a live blues track out there that is more genuine and heartfelt than this one I've yet to find it. Remember part of the beauty of this number is that is is not classic twelve bar but an interesting art-deco-club-jazzy blues with a twist...and a roar. Final bonus is that it is from one of the last three German gigs, so it is a different version than the German video we all have (or should).

Before we launch the new JB record into outer space, I pay homage to my personal favorite on the Lp, "Space For The Papa". Hints of 'Guitar Shop' and 'Stand On It' aside, I didn't think from the live shows that it would be my first choice but as in many cases, going back to read the book after you've seen the movie can be very rewarding. While some of the previous live versions provided much room for experimentation after Jennifer Batten counted down and launched the spaceship Jeff, it's obvious that in this version, recorded during a soundcheck at one of the last three German dates last summer, that Jeff spent a good deal of care with the fingerings and slides and bends on this particular tune. Each phrasing rings out in it's own bold and unique style. Perfecto.

No master is complete without his support. No one is adept as at writing offbeat time signatures that can blend into rock n' roll as Tony Hymas. He's the big brother part that keeps challenging Jeff to come out with daring cutting edge stuff that makes a who else rather that a who cares! Since Jennifer Batten has been on the Beck scene, unheard of things are happening in Jeff's career. He finally came out with a record. He's behaving himself with the other half of the odd couple (Sony). He's playing better than ever before. He's doing extended touring. Who knows, maybe he'll even consider getting Rod to come onstage at one of his show's for an encore. (Rod will be in Toronto on a day off when Jeff plays there we have learned.)

From time to time we come across or are sent some nice Jeff Beck poster art. Some of it appears in other place on the page but here we've put all we got together for your perusal.

This first three comes courtesy of Michael Einhaus. Michael says both of the Fillmore posters are available in the U.S. at Artrock in San Francisco or Psychedelic Solution in New York City. Thanks again! 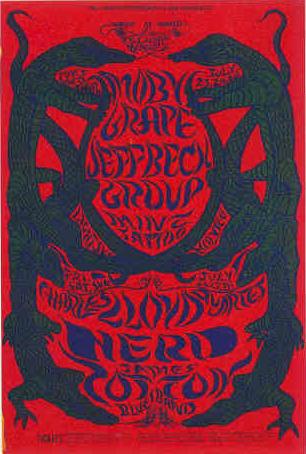 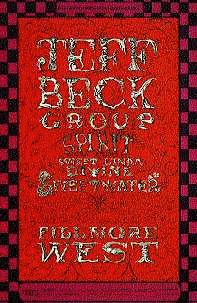 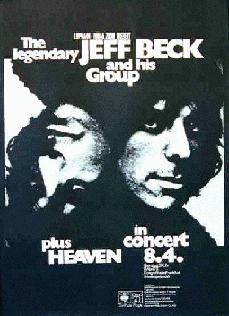 A nice montage a fan made of European Tour stuff. 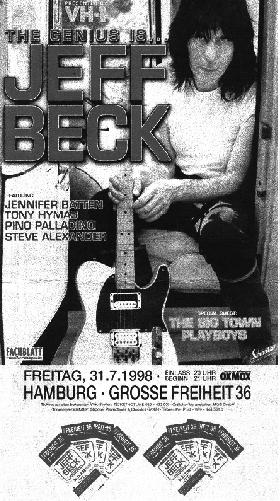 A '98 Tour poster from Germany. 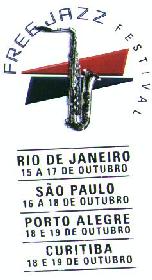 A South American Tour poster of the Free Jazz Festival in Brazil. 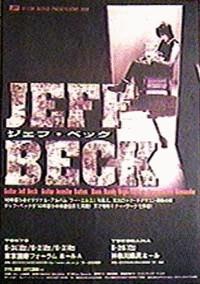 A poster for the upcoming '99 Japan Tour. 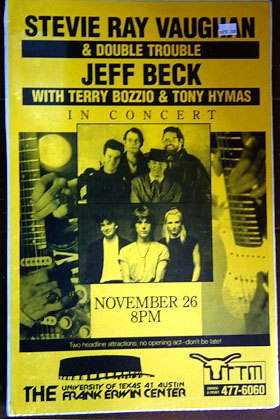 A poster for the '89 Jeff/Stevie Ray Tour. 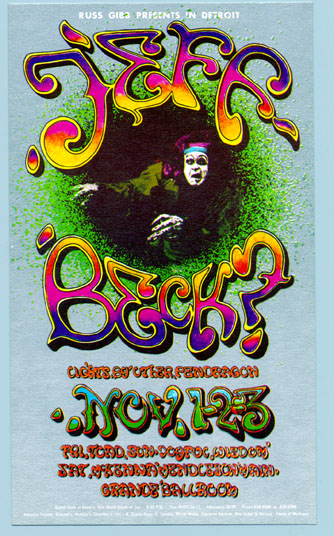 A poster from the Grande Ballroom, Detroit, MI 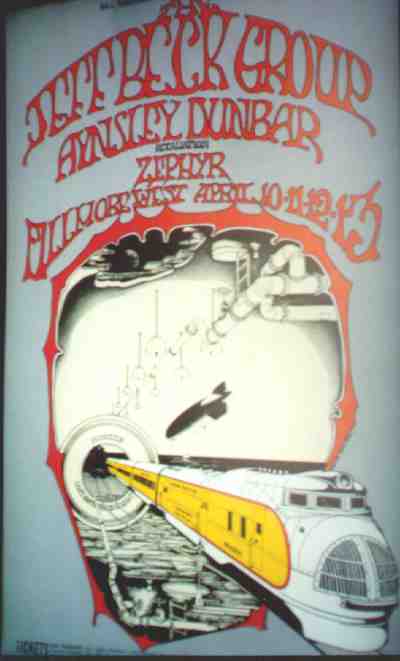 A poster for Jeff Beck & Zephyer 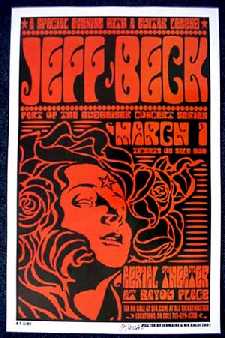 A poster for Jeff Beck in Houston 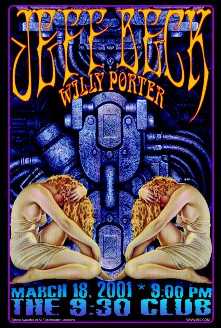 A poster for Jeff Beck & Willy Porter at the 9:30 Club

Who Else? And Tour '99 Press Reports

We'll be adding and updating as we get these in....stay tuned for the lastest.


'99 Tour Reports From The Fans

We'll be adding and updating as we get these in...stay tuned for the lastest.