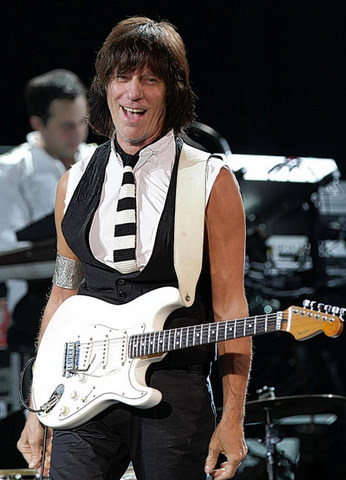 Some say the mark of an artistic genius is the simple things that are said about them that ring true and stand the test of time. Such can be said for Jeff Beck summed up most recently by two diverse associations in Jeff Beck’s career, the fleeting passing of ships in the night with Herbie Hancock and the person that for the past dozen or so years that he has spent the most working time with, Jeff’s guitar and sound maestro Steve Prior.

At the Grammy Awards last February Jeff was bashfully unsettled at being prodded to the stage to co-accept the award for Herbie’s arrangement of “Imagine” along with Herbie and the other contributing artists. “I only played eight f&*%ng notes”…..Jeff said where in Hancock’s retort with an appreciative smile was “Yeah, man but those were the best eight notes”. Music fans have always cherished lines and notes they can remember, play in their head, and wait with anticipation as their turn comes round in the song being performed. Jeff took that from people like Les Paul, Scotty Moore, and Cliff Gallup , and transformed it into the little chirps and sounds we fans commonly refer to as “Beckisms.” Sure there’s always the place for the fastest gunslinger in the west. However Jeff has always chosen that path sparingly and wisely so that tunes like 'Scatterbrain' and 'Big Block' are always fresh, vigorous, and don’t become shop worn.

Steve Prior in the July issue of Vintage Guitar briefly and accurately refers to Jeff being able to ALWAYS sound like Jeff no matter what guitar is being played as this……"That's the greatness of the man - he can literally do anything. He could play the theme to 'Star Wars' on a whoopee cushion." The humor of the whoopee cushion is right up Jeff’s alley. It also allows the listener at times to relate to little inflected lines from other past artists and peers like 'Low Rider' done on this past tour and reverting back through the career catalogue 'Strangers In the Night’ and 'Groovin' among others. Yet when those lines are weaved into the performance they all sound like Jeff, as if the original tunes had indeed been written for him although we know they weren’t.

Lest this editorial ramble on for too long let this Editor add another description of Jeff Beck’s artistic genius I think we all can agree on in its’ simplicity………………….”Wonderful!” 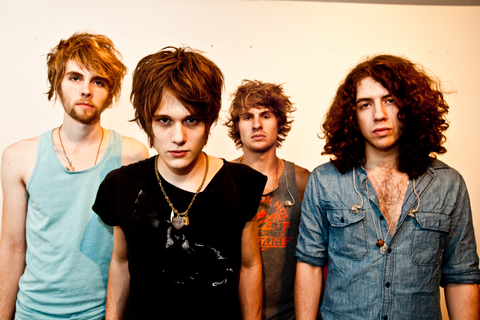 Tyler Bryant And The Shakedown
Photo by Mark Thompson

After espousing how Jeff Beck was his favorite guitarist and loving being able to go out on the road with him, young Tyler Bryant turned and asked me, “Have you ever seen Jeff “lose it” on-stage?” I could sense that somehow Tyler wanted validation that Jeff was actually human and from this universe so I chuckled and told him about the Atlanta fall ‘75 show when the Blow By Blow tour continuation was sandwiched in between opener Aerosmith and The Faces with Rod Stewart. "Jeff’s Strat was feeding back almost uncontrollably. Jeff, obviously not happy at that moment and starting to look angrily around, was circumvented by a spread eagle diving guitar tech Al Dutton literally onto the sprawled stage floor on top of Jeff’s effects boxes. Always the showman, Jeff turned that negative into a crowd pleasing positive as he inverted his axe and pointed the headstock down at Al’s backside. The crowd knew Jeff’s upward look towards them was a Roman gesture thumbs up or thumbs down. The roar of approval was heard, Jeff feigned a couple of fatal blows, and spared Al for another day as he (Jeff) like always ripped back into a fierce solo keeping time with the rest of the band like nothing had ever happened." Tyler grinned at the story as if a huge weight was lifted from his mind.

That conversation is how the sound check ended for Tyler and his band of merry musicians at Villa 221 in Miami, Florida, Wednesday afternoon July 27th. The band retreated into the oversized green room to a feast of edible delights including Tyler’s favorite Coconut Juice. The band had arrived the day before in my town of Lauderdale by the Sea as a neighbor’s daughter is an executive for a beachside small resort Little Inn and put the boys up for a couple of days. A night before show dinner saw Tyler’s other six string guitarist, Graham Whitford, provides a comic thrill. He started shaking violently at the table and swatted his head uncontrollably. Gifted with an ample supply of curly locks, seems Graham was an inviting home for a tiny baby sparrow just looking for a place to call home.

After being buzzed by a summer shallow seeking Tarpon, Tyler was ready for both…….more ocean time relaxing and kicking some butt on the opening night of the Florida tour swing. After a brief stop to play with the vintage toys at Guitar Center Hallandale on the way to Miami, the band and their tour manager Jake Hartsfield pulled the SUV and trailer into the Villa 221 parking lot hidden away in the bustle of Downtown Miami. Bassist Calvin Webster recounted how the trailer had been rescued from the floods in Tennessee as it was being carried away by the raging flood waters. 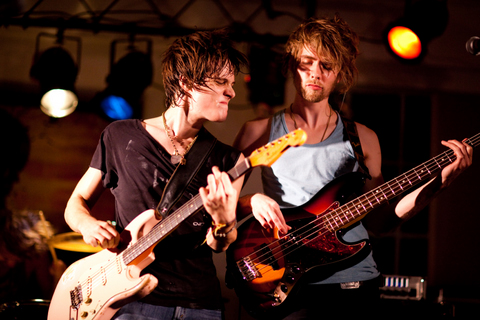 I gave the crowd introduction to Tyler and the band to which Tyler exalted the crowd that it was quite the introduction and that the crowd should give me a hand. Relaxed by the intimacy of Villa 221 Tyler exclaimed during the show that it was like playing in their living room (to about 70 people) and they rarely get to do that. Everybody was into the rhythm of The Tyler Bryant band and their brand of what I describe as hard driving pop metal with memorable melodies, lyrics, and a high energy dose of Jeff’s young pupil Tyler Bryant who sends goose bumps on his own whether churning on his SG Special, bending on his Firebird, or tearing it up and gyrating on the Pink Cadillac Strat. Some softer originals were done by Tyler solo and with light accompaniment from either drummer Caleb Crosby or Calvin. Finally there were several band game interludes that were heartily chimed in by the rest of the group. Caleb Crosby gave a solo in your face in the middle of the audience from a single drum, drum supports, and the wooden Villa 221 floor! From Texas, Tyler had his own brand of Bull Riding 8 seconds as he gave both Graham, a Les Paul toting blues/rock prodigy of his own (and son of Brad Whitford of Aerosmith) Calvin, and Caleb their own 8 seconds to show what they could do and then the band roared into the most Who/Stones/Kinks feel of Tyler Bryant original “Big Time” which got them a standing O. So as not to let the audience forget where he came from, Tyler meshed in a little solo slow Jimmy Reed blues with the slashing Beck/Hendrix whammy thrashing climax of “Where I Want You” before ending the set only to do an encore as they would have had to run the gauntlet of the crowd to get away with less. 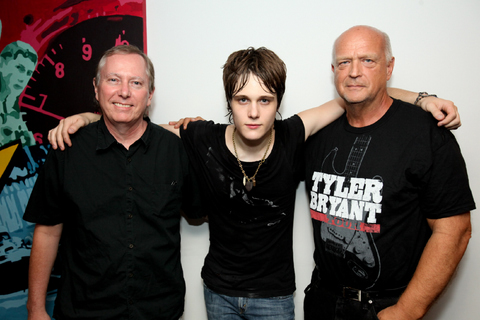 Go see Tyler Bryant and his band. You will leave with a smile on your face. Being of the social media generation he and his management have plenty of YouTube, Twitter, and video/news content at the homepage www.tylerbryantmusic.com. Most of all, go see Tyler open solo with his wah wah acoustic for Jeff Beck on the Canada and NW United States dates coming in October. We trust at the very least he will be joining Jeff and band for the soon to be re-released updated 2011 version of Sylvester Stewart’s (Sly Stone)”I Want To Take You Higher.” 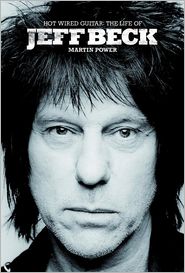 When we heard about Martin Power's new biography of Jeff Beck, "Hot Wired Guitar" that is set for worldwide release the end of September 2011, we were of course eager for details. So, we dug up his email address, emailed him and Martin graciously replied.

About a week later we got another note from Martin....

Thanks Martin, looking forward to reading it. The book is available for pre-order at; barnesandnoble.com as well as amazon.com.

A List: Guitarists That Have Been Onstage With Jeff Beck 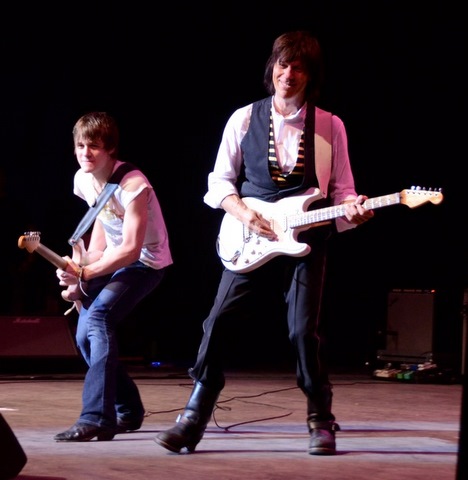 This past summer I had the pleasure of introducing Tyler Bryant to an audience as one of the few guitarists to have been privileged to share the stage with Jeff. Indeed there have been few in the role of equal stage billing/lead guitar solos but in compiling any list it pays to be complete. So I phoned up the good doctor Doc, Beckologist and baited him with the idea knowing that he would jump on it. I rattled off without thinking about it about eighteen or so. Doc quickly added a couple more and then wrote me back a bigger list. From that point on it became a game of one upsmanship with each of us sporting a parry on the other with a find or recollection also involving our mutual friend and Beck mega fan, Jim Cullen. Herewith is the list as it stands noting that Damon Johnson just was onstage with Jeff at the iHeart Festival. Also note that a few have made multi stage appearances with Jeff so we ve tried to keep those particular listings at the earliest decade that a joint appearance was made.

Please feel free to contact us here or Doc through the Multiply Site Link Guitarist's Guitarist to add as surely there are impromptu appearances especially in the UK and early career not yet cited. Here goes!

For even more info, here's a pdf document that Doc wrote that puts alot of this in context.


Doc Goes To Portland To See The Guv'nor 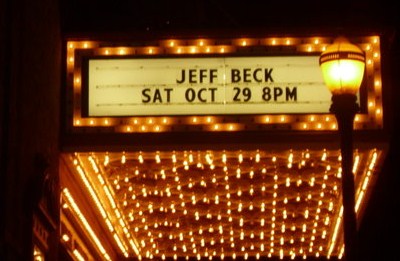