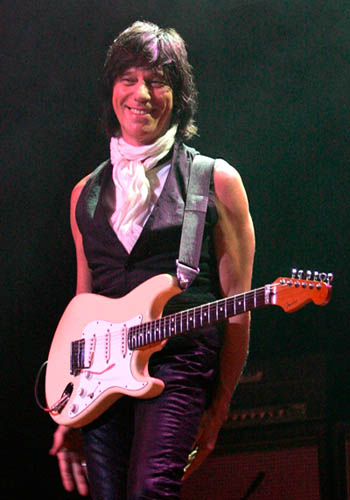 First published on the MOGG Music website.
Jeff Beck since the '60s has been constantly re-inventing what electric guitar sounds are possible through vibrations transferred from the body through the heart and mind, translating to the hand and fingers, running predominantly unadulterated (not bogged down or changed by electronic sound enhancers) through amps and miked amps and boards, and finally back to the ears all in easy memorable form. Yet try to sound like him. Many have and many have left laughing at their own attempts and exclaimed, "How the F&^% does he do it? All the while the basic roots of Rock, Blues, and Soul remain the thread of most compositions but wove in a way that tickles the ears and mind into saying, "that sounds totally different but you know I can see and feel where it came from".

The enigma that is Jeff Beck is the humour of irony. Far behind many of his peers in career record sales, Jeff has picked up four Grammys. Never having his people looking for mass media PR or media "event" set ups like many aging rock stars, Jeff appeared a couple of years ago in front of a television audience of over thirty million with Kelly Clarkson on the American Idol Rewind charity event simply because Kelly asked him to do the duet. Often chastised for not having more of his commercial releases in a standard "comfortable" vocal enviornment for him to play off of, Mr. Beck has none the less in his carreer traded "voices" either on stage or on record (or both) with a partial list including notables like Diana Ross, Seal, Tina Turner, Mick Jagger, Patti Labelle, Stevie Wonder, David Bowie, Robert Plant, Tom Jones, Cyndi Lauper, Wynona Judd, a forthcoming release by Morrisey, etc. etc. oh yeah, I forgot to mention PAVAROTTI!! How many rock guitarists have played with him???? Beatles and former Jeff Beck producer George Martin said it best about Jeff in that Jeff does not need a singer because he IS a singer on his guitar.

Jeff Beck's axe is a voice that is sometimes sassy, sometimes soft and melencholy, sometimes balls to the wall screaming. Through it all like the great Sinatra, Jeff can say he did it all his way. When Jeff gets inducted into the Rock Hall of Fame in Cleveland in April as a solo artist in his own right, it will codify what has been deserved for many years even prior to his induction as a member of the Yardbirds in 1992. It's time the rest of the music world stand up and take notice.

"Since this editorial was written, THANK GOD Jeff has been front and center in the public eye due to his Hall of Fame Induction, the platinum success of the 'Live at Ronnie Scott's' DVD, the genius of the Harvey Goldsmith promotional effort, the appearance as a featured performer in Guitar Hero Five and American Idol Gives Back as well as a top selling, artistically great and well reviewed CD with accompanying world tour. (DW)

I want to thank a fan for a letter and campaign to call in CA radio stations to get Jeff's music on the playlists. I am writing you this response which will appear as the actual editorial for our new Issue 16 of the Jeff Beck Bulletin. The main frustrating question most fans wonder about as you did in your letter is why more people in today's market don't listen to Jeff Beck?

The problem is that Jeff has never wanted to have a hands on with promoting his own music past or present unlike some of his peers. He has always felt that was mostly the part of management. However if you can't get an artist to regularly do the interviews, tours, selected happenings, etc....without current new music cd's out there on a regular basis it is next to impossible to get back in the mainstream of the listening public. Exacerbating the issue is lack of identification with the younger listening public. The majority of people unfortunately are just like that pinhead you mentioned that remembered Jeff as a Rod Stewart sideman or if I can add to your comment have never heard of him becasue he is not out on a PR tour with new product catering to teens.

The other problem is that the majority of the listening public unfortunately want some kind of vocals connection on a regular basis in the artists new catalogue. The only time that wasn't true was the mid/late seventies when a significant percentage of the rock listening public actually played on some level their own instruments from the grade school baby boomers educational parental directives to play...The stars and moon aligned. The "distinctive" vocalists like Jagger, Stewart, Daltry and Bowie that you could pick out instantly had no more recruits. Disco was king. The beat now not the lyrics was THE THING. Us baby boomers who had grown up with the totality of integrated vocal/guitar bands (Yardbirds,Jeff Beck Groups I and II, BBA WHO,Stones,Zep, etc) wanted to embrace the disco funk that had it's roots in black soul and Sly Stone style funk ,but wanted OUR heroes to do it. On the other side you saw all the jazz trained guys like McLaughlin, Hammer and Cobham see the even pre disco funk craze like Sly and The Family Stone and War, and wanted to cash in on it. ALthough there was some killer music that came out of groups like Mahavishnu Orchestra and Stanley Clarke's different combinations, live they had a tendancy to revert back to studio type practice training which became "that was amazing technique but I can't remember but a few seconds of the eight minute solo they each played."

Jeff had been tortured between wanting another good band but seeing the response he got from playing things like "Defineately Maybe" on stage, wanted now to make his guitar the spotlight. The final piece was having Carmine being empathetical with Jeff reagrding the jazz guys early attempts at disco/rock/jazz fusion listened to by them while cruising the English countryside in a Pantera. The result of course was Blow By BLow which when played live demonstrated to a SIGNIFICANT portion of the listening public that here there was finally a cool, hip, theatrical emotionally gut charged performance that was easier on the ears than the Berklee schooled fusion and let the "guitarist" in us all live vicariously through a genuuine hero. Therefore Blow By Blow and Wired actually CAPTURED THE MOOD OF THE TIMES and were the two best selling instrumental lp's ever in that short public attention span of the Edgar Winter/Average White Band/Stanley Clarke, Jan Hammer, Cobham, and our guy Jeff Beck's mass public appeal years.

Unfortunately all of it was taken back to an excess, not jazz wise but strangely enough classical and pentonic excercises disguised in a rock format to excess by the "shredders" Van Helen, Satriani, Vai etc. There was less of a listening public for these guys because the melody's weren't as accessible to the mind and therefore limited the mass appeal. The public then wanted something else which was of course the mix of synth pop and back to the early rock roots with again lyrics and flamboyant singers now with a much rougher and less artistically gifted set....The Punk Rockers and later hip poetic cleaned up garage bands in the form of Grunge.

Many of the early English heroes, realizing that to stay viable had to constantly try new projects and have a PR entourage to keep them in the limelight, did just that. Jeff of course continued what he had started and branched out to capture his take on different world and cultural sounds all loyal to his rock and blues roots, however artistically staged and altered. Great for us that love the sounds of his guitar. Bad for the masses who either never heard it or never gave it a chance because it wasn't "hip" and there was no continual public persona of Jeff by now the JD Salinger of the rock world. Fortunately Jeff is touring more the last few years albeit with predominantly back catalouge. Let's hope a few of the newer pieces like 'Scottish One' and stuff I'm sure is on tape but not made it into the live set that at least his fans can call "new" Jeff music.

The ultimate irony is that despite all Jeff's peers countless years of slaving away to keep their names out there, Jeff gets spotted by happenstance by Kelly Clarkson who was a fan, and got asked to perform with her in front of a 30 plus million TV viewing public for the American Idol Rewind show! Eric, Jimmy and Robert must have given an amused knowing smile!

PS: I feel there is hope on the horizon. Education is back of sorts with the Guitar Hero video craze. Although Jeff is not in there many of his later contemporaries are, all who when researched by young devotees will have quotes about Jeff....enough so that curious young minds will want to listen. Also taking guitar lessons has experienced a new boom recently and a lot of teachers.....you got it.... are Jeff Beck fans.

PPS: With Harvey Goldsmith taking over the management there will definately be a big PR push. With the advent of the "new" record started last year featuring Imogen Heap on vocals we may get a WILD version of what "You Had It Coming" lp hinted at. ...this time with all the "live" feel guns of Vinnie and Tal.

Lets all just hope and pray that this project won't be just "snake oil" but the real new deal featuring our stratocaster master, Mr. Jeff Beck.