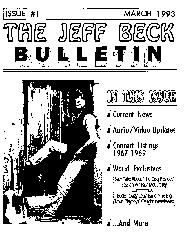 
Welcome Jeff Beck fans new and old. Each issue of The Jeff Beck Bulletin will give insight into what Jeff is doing now, may\do in the future, and will disclose seldom discussed interesting facets of his brilliant career. Letters and comments are welcome. All will be answered provided they are accompanied by a SASE or International Reply Coupon. Newer fans not totally up to date on where Jeff has been career wise may want to invest in the Beckology 3 CD set, check out a record trade publication to contact Beck collectors.
Issue #2 of The Jeff Beck Bulletin now in production!
Due July '93 Order Now! Tell friends!
To contact the editor,write Dick Wyzanski 3221 Noah St. Deltona,FL32738.

Oh, by the way Jeff, thanks. You're a pretty decent guitar player. I think you'll go far in this business. Copyright 1993™

note: (Audio/video listings mentioned in this article are from private collectors. More information may be obtained about any and/or all of them by contacting collectors who put name listings in record trade publications. The author does not condone bootlegCD's.)

David Bowie and The Spiders From Mars last show with Beck encores including the never TV broadcast 2nd encore "Round 'n Round". Jeff plays on the Magic Bag as the camera catches Bowie smiling his approval at the technique of the UK National Treasure...Guitar Shop Tour dates getting better all the time with the best audios so far at Edinburgh,Scotland and Cincinnati, Ohio...BBC-TV video interviews are a gas, especially"Rapido" with our plank- spanker home at work on his Hot Rods in his garage. Also included is a great panning shot of Beck's estate grounds,mansion, shiny StreetRods, and his dog. Still get chill down my spine when I watch the "Definitely Maybe" video from The Beat Club...San Francisco ARMS video contains Jeff on encores but his set is not on them... Audio "Wired" outakes are on the scene...MTV clip of Jagger/Beck doing "Carol" is great but who has the whole song on video or for that matter the whole shoot?..Listen to Jeff's comments to his audience between numbers during his live shows thru the years. Some are hilarious. We'll do a whole article of them next issue...Back to video, Lenny Henry's comic blues spoof is marvelous with Jeff Beck looking amused at Henry's John Lee Hooker style garb and cracking up when Henry places a Beck solo in jeopardy with a well timed one note passage with his blues harp! Ever notice Jeff loves to play with the strings above the nut on his Strat for sounds? Just seeing if you're still awake.Beck bends on his whammy bar to get a Clint Eastwood "The Good, The Bad, and The Ugly" style Western effect on Tony Hymas' "Crazy Horse" from Tony's French "Oyate" CD...Don't shelve your video of "Frankie's House" just yet. There are a couple of incidental Beck made sounds not found on the soundtrack. Most notably the Asian twang passage that ends and begins each break...Clarification Dept., The long version of"The Tube" (BBC-TVshow) was recorded during the "Flash" outakes and is the funky outake with Jeff and a "thumb popping" Doug Wimbish on bass. The short version currently available to collectors is the short version recorded off the TV intro to the show and produced by Trevor Horn. Is there a clear studio tape of this second version not recorded off the TV?...We forgot to mention in the last 'zine that Jeff and Tony did some soundtrack work for a BBC TV show "South Atlantic Raiders". It features an early form of "Where Were You" done to a Beck's Bolero beat! Short outake is available but we'd love to have the whole thing! Finally the BBA silent 8mm skit in Boston '72 is on VHS. Beck lies prone on stage at end of the encore but rises from the "dead" to smash a pie in Carmine Appice's face! Be seeing you. Dick W.

"Frankie's House", the most elaborate film soundtrack JeffBeck has scored, is available from the UK on vinyl and CD, and was released in the U.S. on January 12 on CD only. The film aired on the Arts and Entertainment cable network on February 21st and 23rd in the U.S...Beck, along with Jed Lieber on keyboards mirror the gamut of war-torn Vietnamese jungle emotions against the backdrop of the real invading force...Western civilization.